Get the full episode by becoming a Patreon at Patreon.com/Frotcast

It was Oscars week this past week, and you know what that means. The glitz! The glamour! The poorly-conceived bits! Da Butt! Pod Yourself A Gun producer and LA comedian/host of the Reactivaders podcast Brent Flyberg joins Vince and Matt as we DIG IN, to all of the various Oscar controversies and keep our piggies’ greedy snouts filled with slop. Is Hollywood too out of touch and that’s why no one wanted to watch the Oscars? Is it PC culture run amok when Adrien Brody can’t even force Halle Berry to make out with him onstage anymore? And has Donald Trump reached his ultimate form in becoming the guy who emails his complaints about the Oscars to media outlets? We discuss all this and more, like whether we’re going to go bald and how quickly Prince William went from young handsome heartthrob to British-looking British man who looks just like Prince Charles. Finally we catch up with Doug Ellin and the cast of Entourage, who apparently have a new podcast out about Entourage and how great it was, and how HBO is too PC now to do an Entourage remake, or let the Entourage boys continue making money from Entourage. Cancel culture is out of control! Let Doug Ellin buy another house you Feminazis!

Join our Patreon to get this week’s bonus frotcast with Matt Lieb and Joe Sinclitico going solo without Vince. Subscribe now!

This is a very special episode of the Frotcast in that Vince Mancini was not able to make it. So Matt Lieb and Joe Sinclitico Frot all by themselves and boy is it all over the place. We discuss Oscar nominations, proctology, and how we both enjoyed the game “The Last Of Us Part 2.” Joe is frotting from his cell phone so please forgive the audio quality, although to be honest it somehow makes him even funnier. Enjoy if you dare.

Sup piggies! Are you ready for another week of movie and television news distilled into a palatable hour and a half of premium audio content? ME NEITHER! But you better get ready, because like it or not Matt and Vince have doomed themselves to a life of being your one stop shop for everything HOLLYWOOD. I’ll admit, this is all kind of stream of consciousness and I’m probably not making as much sense as I feel I’m making. This is Matt Lieb, by the way.

Anyway, this week Vince and I welcome back Harry Moroz to the podcast where we discussed everything from why comedy is actually not that important, to Michael Shannon’s short but memorable role in the movie 8 Mile. He was having sex with Eminem’s mom. We also begin preparing the rules for Vince’s annual Oscars drinking game.

And speaking of the Oscars, it’s time for a BIG FROTCAST NEWS ALERT! *airhorn* *airhorn* *airhorn* Vince and I are going to be doing a very special Oscars livestream this Sunday at 5pm PST, and you can watch it for free on the HotMic app available on the app store! Just download the app and use the promo code LIEB and you’ll be able to watch me and Vince and maybe a special guest talk over the Oscars broadcast live. You can chat with us, even tip us like strippers. The app syncs with your tv so that you can hear our commentary in real time. Or you can just listen to us talk and not watch the Oscars. The choice is yours! Download the app HotMic right NOW!

It’s that time of year again where the powerful forces that control the entertainment industry all meet together in secret and use their dark power to force Matt and Vince to do a Frotcast that talks mostly about movies. That’s right, it’s OSCAR SEASON!!! The glitz, the glamour, the gallantry. The Academy Awards are the second most important event of the year next to the Grammys. And Matt and Vince have all your Oscar noms ready to dish for all you hunger-pang ridden piggies to lap up. We talk about Best Picture! We talk about Best Actress! We talk about the fact that for the second year in a row the Academy has decided it would be safer to just not have a host because it’s impossible to find a comedian who does not have a problematic past and they don’t want to risk the Oscars being #Cancelled. Matt and Vince are certain that is the reason, and it has nothing to with the fact that a comedian host might want to talk about Harvey Weinstein, Kevin Spacey, and probably Jeffrey Epstein and they were like “what do you think this is, the fucking Golden Globes?! We are far too important to be roasted.”

Anyway it’s a very good episode about how important the Oscars are and how many wonderful movies were nominated. We just love the movies. Truly a magical experience to consume movies. Yum.

For real though, Parasite is the best. For part two, become a donor at Patreon.com/Frotcast!

You can add the bonus feed to regular podcast app! You’ll never be lonely when you have the Frotcast.

Who’s a better awards show host, Ricky Gervais or no one? Did Ricky Gervais’ Golden Globes monologue DESTROY HOLLYWEIRD LIBS or was he just takin’ the piss, mate?This week we transition from discussing this year’s host-free Oscars (ghost awards show hosts!) to the ex-Uber CEO Travis Kalanick’s big plans for “ghost kitchens,” where you can order algorithm-inspired food prepared by contract workers on an app funded by the Saudis. Yum, I love A/B testing! One of Kalanick’s Galaxy Brainchildren is apparently called “Bitch Don’t Grill My Cheese,” a name so idiotic it’s been stuck in my head all week. Now it’s your turn to be annoyed! You’re welcome!

Our guests this week include screenwriter Tom Dean and comedian Jessica Sele. We’re talking awards season, ghost kitchens, and the new plan to use artificial intelligence to decide which movies to greenlight. Yes, this is a real thing that’s happening. Is it just me or do we live in the stupidest possible future? Once we tire of that we reminisce about Batman Returns, the most gloriously weird superhero movie ever made. Was Tim Burton’s big idea for the Penguin that he just act like an actual penguin? Having flippers for hands and eating fish and shit? That was awesome.

Anyway, Frot on, and don’t forget to become a patron at Patreon.com/Frotcast. You’ll get access to all our bonus content, including bonus episodes, review shows, and live riffs. You can add the bonus feed to regular podcast app! Get on the right side of history. 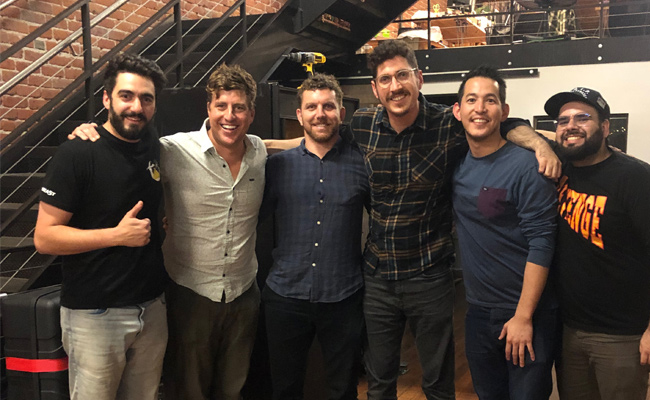 If the Frotcast sounds mad profesh this week it’s because we were down in Santa Ana recording in a real studio — well, a real business, anyway — at Foodbeast HQ. Sitting in with Matt and Vince were Geoff Kutnick (second from right) and Elie Ayrouth (left) from Foodbeast and Uproxx Life editor and author of Danger Gang and the Pirates of Borneo Steve Bramucci (next to Vince). We talked about how Foodbeast came to be, the boys’ favorite Taco Bell orders (shout out to Mountain Dew Baja Blast), and of course plenty of movie topics. Those include who’s going to host the Oscars now that Kevin Hart did a gay joke in a tweet seven years ago, Kevin Smith’s thriving crying-after-trailers business, food porn in movies, Crazy Rich Asians, and more. And of course we manage to fit in plenty of stupid accents along the way. Why? I don’t know why. There is no why on the frotcast.

Donate at Patreon.com/frotcast and leave us a review on iTunes! You’ll never be lonely when you have the Frotcast.

Do you like bad accents and wild tangents? You’re in luck! That’s right, baby, the Frotcast is back! Our old friend Laremy Legel, co-star of the world famous documentary Whoop Dreams, is back in the Frot orbit this week, joining Matt, Vince, and Joe Sinclitico. We discuss Kevin Hart hosting the Oscars, Matt Damon, the idiocy of awards season horserace coverage, Peter Jackson’s WWI documentary, and by popular demand, the mom who named her child “Abcde.” Oh, and the world’s highest-paid YouTuber, a seven-year-old (this is true, sadly). Enjoy, Frot on, and check out our Patreon for even more #Content. You’ll never be lonely when you have the Frotcast.

This week on the Frotcast, Adam Tod Brown from Unpopular Opinion and Stephen Furey from Follow That are in the studio to talk about Tomi Lahren’s cocaine tweets, Alex Jones’ shadowban, the new Oscar for “popular” film, the pitch for The Meg, and Sorry To Bother You. All that AND the Royalty Freestyle. Enjoy and frot on, donate at Patreon.com/frotcast and thanks for being our online friend.

7:28 – Welcoming all our new ex-Inforwars listeners